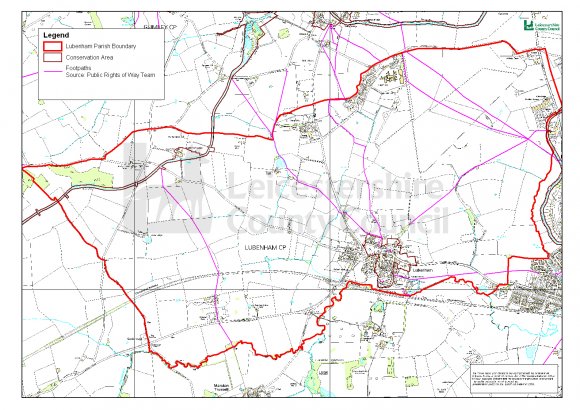 The Parish Council agreed that the area to be covered should be the whole of the Parish of Lubenham situated in South Leicestershire on the border of Northamptonshire.

The Parish currently has a limit to development and a designated conservation area relating to the main settlement.

Lubenham Parish is some 2 miles from the market town of Market Harborough, with the main settlement straddling the main A4304 Market Harborough to Lutterworth road and is bordered by Northamptonshire to the south.

The Parish is bordered by the Parishes of Foxton, Laughton, Gumley Theddingworth, the town of Market Harborough and Marston Trussel and East Farndon (Northamptonshire in Daventry District Administrative area)

The village has a number of amenity areas all of which are administered by trustees and volunteer management committees; these include the Green Gardens (village green and allotment gardens), village playing field and war memorial.

A part of the Grand Union Canal runs to the northwest corner of the Parish and part of the southern boundary is the river Welland with a semi derelict 'wash pit' in it.

To the south of the Parish is the disused railway line with parts of it supported by bridges one of which is now listed.

Footpaths cross the farmland that links the various parts of the parish.

The landscape of the Parish is characterised by the low lying land surrounding the river Welland that rises to the north towards Mill Hill and beyond with some very attractive green field sites that provide substantial views. The rising land towards the west and Market Harborough provides a strong and important buffer from the Market Town. There are numerous features and historical aspects and heritage aspects to the landscape that can be identified as important to local people.

The village settlement has a lively community which holds a number of events each year, mainly for fundraising purposes, these bring numerous people to the area as tourists. The main events are Open Gardens, Scarecrow Festival, Heritage events and meetings, afternoon teas and music events. The local open spaces are important to the success of these events.

There is a Village Hall, built in 2003, in the main settlement that is entirely voluntarily run and well used both by village and outside groups, residents and businesses.

The village has a mediaeval church surrounded by a churchyard and a recently extended primary school with a large playing field.

The large Village Green is frequently used for events and by local people as an amenity area. This is a part of several parcels of land known as The Green Gardens which also includes a treed area and 4 parcels of land providing allotment gardens.

There is a children's play area that was bought by the village following the second world war. This area is equipped with play equipment, it was last refurbished in 1993 and is now in need of some updating and possible addition of adult gym equipment.

There are some interesting listed buildings, notably The Tower House, Manor Farm, Gore Lodge, The Old Vicarage and The Old Hall as well as All Saints Church and the railway bridge.

Gartree is an estate of houses, built around the 1960s, lying to the north of the parish and adjacent to HM Prison Gartree. This area has a character of its own, however there is no designated play space nor any community building for local activities and the community tend not to engage with the main settlement for activities.

Greenacres is a designated as a gypsy site, with various registrations between 1996 and 2006. It has, like many, undergone some development in the past. This part of the Parish being on the northern edge is linked more closely to Market Harborough.

Bramfield Park is situated on the western edge of the village, it is a registered caravan park originally registered in 1981 reissued with new conditions in 2009.